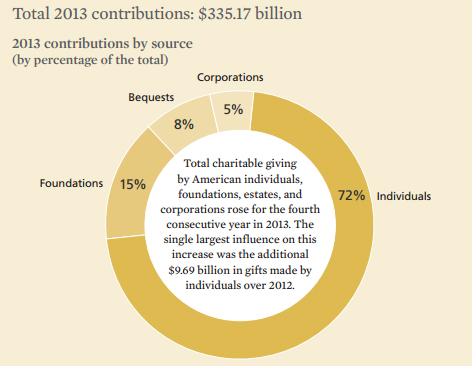 The 2013 Charitable Giving Report from software and services provider Blackbaud summarizes its 2013 charitable giving data for the nonprofit and education sectors.

“It was a very healthy year,” said Chuck Longfield, Blackbaud’s chief scientist and founder of The Blackbaud Index.

In 2013, overall charitable giving increased by 4.9%, ranging from 5.7% growth for large nonprofits down to 3.6% growth for small organizations. International Affairs organizations had the largest growth in overall giving with a 13.2% increase followed by environment and animal welfare organizations, with an 8.6% growth rate.

As it was in 2012, more than one-third of overall charitable giving occurs in the last three months of the year.

Online Giving
The report also contains the online giving data from 3,359 nonprofits and over $1.7 billion in online fundraising revenue. In 2013, online donations accounted for 6.4% of all giving. Small organizations, with less than $1 million in yearly fundraising revenue, received 7.8% of their contributions online while large and medium organizations received 6.8%, and 5.4%, respectively.