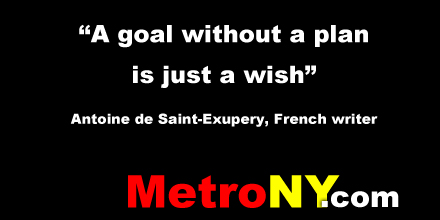 Recently I asked a business coach for advice on saying no to a goal without a plan. Okay, not just saying “no,” more like driving the word home. An opportunity was pitched to me, and although it was something I would enjoy leading, it was just a goal, more like a wish. There was no realistic and executable strategy. To make matters worse, the team had a record of losing money on deals. I politely declined the opportunity.

That did not discourage them. New requests came from via phone calls, emails and even texts. The “no” was always ignored and followed the next day with a new request from someone else. It became so ridiculous that handling this situation was something I had to schedule and prepare for every day.

There is a difference between tenacious retooling and badgering. I checked in with my business coach. “What do I do?” I asked. I was frustrated with the lack of respect for my decision and the time this was taking away from my day. I had solid reasons to turn this down. The opportunity cost was too high. The work would take away time from my family and my business ventures, but most of all, the goal was not achievable without a plan.

It was possible but not probable. Initially I had contributed ideas for a long-term strategy. My ideas were initially accepted, but quickly things went back to the way they were always done. The financial hemorrhaging method.

A goal without a plan is just a wish. Antoine de Saint-Exupery, French writer

These are true words, unless leprechauns play into it somehow. This was no opportunity; it was an energy black hole.

The business coach gave me two canned responses to work with. The first came across as rude so it was discarded. The second put the onus on me and I worked with that one. Here is what I use for those who just will not accept an answer, “How can I phrase the word “no” in a way that you will accept and understand?” Direct, pointed. It worked! Although the recruiter was put off by the remark, I have not heard a single request again!

“A goal is a dream with a deadline.” – Napoleon Hill