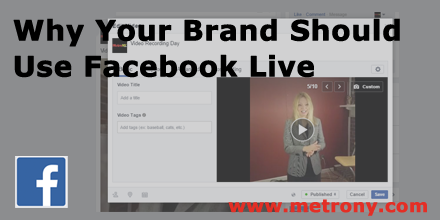 Video marketing is not a new concept in content marketing. It has been a preferred form of connecting with others for years. Video lets us connect on a more personal level, demonstrate a product, or even serve as front-line customer service.

Up until recently, producing videos was affordable only for medium to large budgets or brands. The cost of recording, editing and distributing video content has decreased dramatically due to the impressive quality of smartphone cameras. It now is a reasonable and achievable for businesses of any size to commit to incorporating video into their regular marketing strategy.

If a brand already has a video content marketing plan in place, it is likely that YouTube is one of their distribution channels. Don’t forget about Facebook though! Videos produced for YouTube channel can be repurposed to on a website, in email campaigns, and uploaded to a brand’s Facebook page to earn even more reach.

Now we have another player in the video game: Live video. If you have not embraced scripted videos, such as tutorials, comedy channels, and product reviews, then you probably did not rush to create your first live video!

Live video comes in a few forms. There are super short-form videos such as Snapchat and Instagram Stories. The live video a brand should be most interested in right now is Facebook Live or YouTube Broadcasts. Both offer video creators the ability to broadcast live right from a smartphone of desktop computer. No special equipment needed.

It is challenging to punch through the Facebook algorithm and earn organic reach from a post. It’s also difficult to build up a following on YouTube when just starting out. Consider live video and opportunity to get more out of each channel.

When Facebook has a new feature or offering, Facebook wants that new feature to succeed. That means, until there is adoption en masse, the newest feature, whatever it may be at the time, generally works really well and gets far more reach than an average page post.

YouTube is a Facebook competitor and launched its own version of live video, called YouTube Broadcasts. The YouTube rollout has been a little slow for some channels, but it is there now for many creators.

Live video broadcast on both Facebook and YouTube have yielded some impressive reach and interaction. There does not seem to be a limit on how many times a channel can post and still get an increased reach. Meaning, that there does not seem to be a video “banner blindness.” Viewers keep coming back for more racking up huge watch times. They are not shy about interacting with the broadcast either.

Even restricted industries, such as gun dealers, that are difficult to market because they are limited in their use of many online channels can benefit from live videos. They too are enjoying increased viewership when live. We have consistently seeing pages and channels get over nine times the reach an ordinary post earns.

Is live video this year’s flash in the pan?

Whenever there is a new social channel or feature, marketers wonder, “Will this last?” They have to weigh their options and resources and figure out if this new feature or channel in online marketing is the latest fad or something that is worth building up.
It safe to say video marketing is here to stay. The concept of video marketing is not new, but delivering it live is. The two largest live video platforms, Facebook and YouTube, are established titans in marketing. Even if the effects of live video fade or the algorithm stops favoring this format, then at least the lasting effect will have been a larger viewership and a bigger subscriber base.

It is worth investing time and resources into live video.