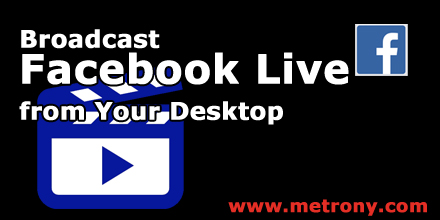 Facebook Live is a feature that gives live-streaming video capabilities to users. It is currently available to all users via the Android app, iPhone app or iPad app. Real-time video are posted directly to a user’s Facebook wall. The videos then appear in friend’s newsfeeds. Facebook users can “subscribe” to a Facebook account so that they may be notified the next time that Facebook account starts a live broadcast.

Facebook is the world’s largest social media network. It currently has, Facebook had 1.71 billion monthly active users, as of the second quarter of 2016. The social giant boats 1.13 billion daily active users. According to Facebook, users watch 100 million hours of video per day on Facebook.

“Our community and business had another good quarter,” said Mark Zuckerberg, Facebook founder and CEO. “We’re particularly pleased with our progress in video as we move towards a world where video is at the heart of all our services.”

Up until now, Facebook Live was a mobile-only application. Users recorded live video from events. This feature helped Facebook compete with apps such as Twitter, Periscope and Snapchat. Facebook Live is available to a small number of users’ desktop and laptop computers, and is in the process of rolling out to all users.