Not uploading your own profile image – a headshot if for a personal brand or a logo for a business Twitter account – is a mistake. Other users are unlikely to follow or retweet a Twitter account that does not have a clear profile image. Why? Missing or fuzzy images are the mark of a spammer or internet troll. Other serious social media users will simply ignore you or worse yet block your Twitter account. Gasp!

A personal brand should feature a nice, clean headshot. If you do not have a high-quality profile photo, then enlist the help of a friend or a professional photographer. Be sure to change it every year or two to keep your account looking fresh unless you don’t age for some freakish reason. Afterall, you do want people to recognize you in person if you ever meet!

Profile images serve as a first impression. They are the most important image on any social media account. A profile image is the one that appears next to every single comment and interaction. It’s truly your first impression – make it count!

Descriptions are an opportunity to introduce yourself and your organization. Like missing profile images, blank decryptions cause users to ignore your tweets. It is challenging to build and maintain a quality audience. Don’t give viewers a reason not to follow back.

Include an image with as many Tweets as possible. The Twitter stream is fast moving and cluttered! Tweets that only contain text get fewer retweets and engagement. They simply get lost in the crowded conversation. If you are actually conversing with someone across Twitter, then the image is not necessary. However, for an account that is posting to share helpful content, include an image whenever possible. Use large, sharp colorful images that stand out in the bust feed. Twitter accepts video uploads too!

Whatever frequency you decide is right for your account, be sure to post on a regular basis. That means, don’t tweet five time per day for a month, then disappear for the next month and come back. Power users will have filtered you out and unfollowed your Twitter, writing you off as a stale account. Stick to a schedule, even if it is only once per day or even once per week.

Selling 100% of the time is a buzz killer! This is a challenging topic for many social media newbies. Find a way to share content, that is not your won, but still relevant to your followers. For example, if your brand sells fitness equipment, then include other healthy lifestyle tips. For example, post recipes or ideas about where to go for a hiking adventure. Make your Twitter account about being a resource that people will want to check in on for useful information.

We’ve all seen some hilarious Twitter war wins. The recent example of Wendy’s and their Twitter rant about their fresh hamburgers was humorous and successful. The rant by the official Wendy’s corporate account won lots of positive press. Unfortunately, a Twitter war can go seriously wrong for a brand. Unless sarcasm is part of your shtick, refrain from engaging in Twitter wars or other social media rants. It’s too risky. Handle your public outreach with quality customer service and genuine respect.

Twitter announced that users are now able to write longer Tweets. The URLs for photos, videos, GIFS, polls and Tweet quotes will not count as part of the 140-character limit. The update to the social media channel is rolling out to all users of the social media app on both desktop and mobile app versions.

Twitter is famous for its unique and super short character count limit in posts. Users had to compose all posts, called Tweets, in 140 characters or less. This limit included all hashtags and URLs. Formerly, media such as images, videos, and GIFS used up a portion of each tweet’s 140-character limit because they liked to a URL. Now these are excluded from the character count and users have at least a little more room to express themselves. Links pasted into a Tweet are still counted against the 140-character limit as they always have been. 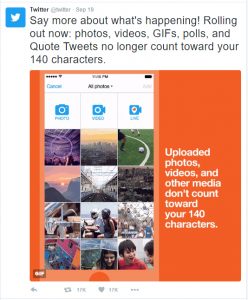 Another new feature is that users can re-Tweet themselves – just in case you want to say something twice! This gives Twitter users 280 characters for a single Tweet (140 for the re-Tweet on top of the 140 characters for the original.)

Two days ago, I sat at a social media conference in Boston where I had the good fortune of sitting and chatting with three other social media pros – a marketing professor, a financial industry consultant, and another who works in corporate communications. We learned quite a bit from each other sitting at a round-table rather than a typical auditorium style seating. I found myself defending Twitter as a social media marketing channel.

One of the most common question I hear is, ‘What social media channel should my business use?” I have an overview of social channel stats on a YouTube video. (By the way, your brand should most likely be on YouTube too!) I will agree Twitter’s user growth is stagnating, but they are making changes to the channel to stay relevant and keep up with other giants such as Facebook. Twitter has targeted audiences for paid social ads. There is Twitter tracking that is easy to install. Yes, posts are limited to 140 characters, but that allows users to skim for the content they really want.

I have been looking for a neat tool like this for some time, so finding this easy way to download Twitter followers was a huge help!

How to Increase Social Media Engagement

The world has a love of visual communication. People of all ages and cultures share photos and videos of their everyday lives. We cannot get enough of pouring over photos images of travel destinations, fashion, and food. Do it yourself videos are the go to for many trying to master a new skill.

This is evidenced by the popularity of well-trafficked social media sites such as Facebook, Instagram, LinkedIn, Google+, Twitter, Pinterest, and SnapChat. Video is expected to surpass images in popularity in 2016 so we have to include video is on sites such as YouTube and maybe even Vine in our marketing strategies! Images are only optional in two of the social sites I listed – Facebook, LinkedIn, Twitter, and Google+.

We look to be entertained with no down time. If we are not engaged in an activity, we are heads down looking at something on our smartphones.
According to the US Department of Commerce, US E-Commerce Sales accounted for only 7.40% of retail Sales in the third quarter of 2015. However, many businesses are 100% online must do all they can to drive ecommerce traffic. 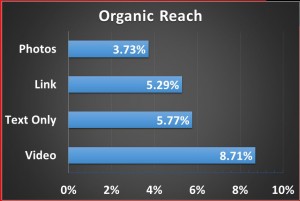 Including images also increases the likelihood of a Twitter Tweet will be retweeted! (Say THAT three times fast!) Tweets with images and native video simply stand out on the Twitter stream. They receive more retweets than Tweets that only include text. [Figure 2] 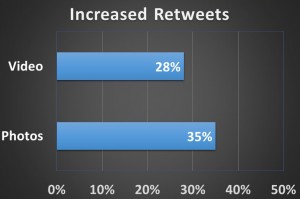 Networking is an opportunity to learn. Many take interest in networking events if there is a clear path to a money making opportunity. I disagree. A few years ago, after a series of significant events in my life, I promised myself I’d be more open to accepting invitations, pursuing opportunities and exploring open doors when they presented themselves. I was always rather quick to say “no thanks” and remain aloof allowing opportunities to move on without me. Walking through the open door can be exciting and lead to a career opportunity and almost always leads to personal growth. I simply have to step through. Recognizing that many people do not agree with me. I explain away many open doors as meeting with a potential client. Well, that’s sort of true, isn’t it? Anyone is a potential client for my digital agency.

Yesterday I was in Manhattan meeting someone who is part of the leadership team of the Lead With Giants community we belong to. When group members find themselves in the same city, they try and meet for coffee. Did I go to the meting thinking I would get something out of it! Absolutely! At the very least, I would have a new friend and colleague.

As a result of this no agenda meeting, I’m pleased to announce I will be co-hosting a Lead with Giants Tweet Chat on December 7th. Our topic will center on Leadership after a Failure. I hope you will join us, Leadership Tweet Chat to find out how. It’s free!

Slides from my talk with Dennis will be posted here after PubCon 2015 concludes. Here are two of my slides which talk about importing users from other social networks and uploading them into Facebook

With a larger follower base you can increase your following on Facebook, targeting those who you know are already interested in your product or services. It’s also a way to find a larger audience similar to your current users. I have posted some Tools to download followers from social networks

You can use tips these to: