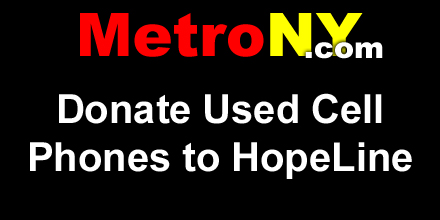 An unexpected package arrived at my door last Friday. I ordered new cell phones and switched cell service phone plans although I stayed with the same carrier. I am still waiting for my new phone to arrive but even before I opened it, I knew that this package was too thin and two days too early to be my phone.
Inside was paperwork from my carrier, Verizon Wireless. The receipts for my transaction were already emailed to me, plus I can access them online. The paper copies were redundant but definitely good customer service.

What was so impressive was that the package contained an envelope to use to send back my old cell phones. Apparently, Verizon collects used cell phones from any carrier and donates them to men and women who are survivors of domestic abuse through a program called, HopeLine.

Verizon not only sends envelopes for the phones, they pay for the postage as well. This was so unexpected. Neither my sales agent nor the customer service representative I spoke to mention the program. It made my day, last Friday, to open my mail and find out a corporation running a giving program.

This is not the first effort from Verizon Wireless. Earlier this year Verizon nailed the messaging with their 2014 commercial 2014 called “Inspire Her Mind,” which beautifully embodies the anti-STEM messaging many girls receive as they grow up. This commercial does a fabulous job demonstrating the effects of societies influence on career decisions. Many adults do not realize how their words become embedded in children’s minds.