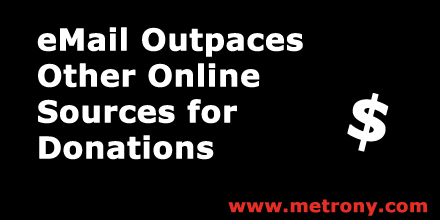 The new 2014 M+R Benchmarks Study is out and provides a view of online performance for 53 U.S.-based nonprofits. The annual report covers email strategies, mobile programs, fundraising, website activity, and two social media networks. The data includes the results of over 2 billion email messages and over 5.6 million online gifts.

The data shows that nonprofits are reaching more of their client base through websites, email campaigns, and social media. Online giving increased by 14% while the average gift sized increased by only 2%. Monthly giving revenue grew 25% in 2013 and accounted for 16% of total online giving.

Monthly website traffic for study participants grew by 16% in 2013. Online revenue and the number of online gifts both increased by 14% last year.

I can say that the opposite held true for a startup nonprofit I worked with the first half of this year. They held their first ever event on Cinco deMayo. Website donations far outstripped any other form of cash donation. The average online gif was $105. The only other donations that were of greater value were in-kind donations of goods for the auction.

The 13% overall email open rate was a decline of 4% from 2012 even though the average overall email list size grew by 14% in 2013. However, the prospecting was worse for fundraising emails with a response rates decline of 11%.