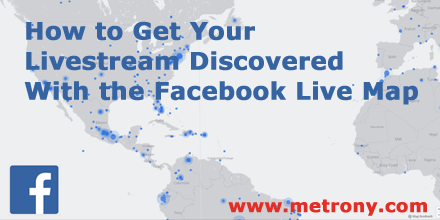 How to Get Your Livestream Discovered With the Facebook Live Map

Facebook introduced livestream video back in December 2015. It gave verified users the ability to stream live video right from their Facebook newsfeeds. Any follower received a notification of the livestream and could instantly tune into to see the show.

Early adopters were only able to livestream from mobile devices. The feature was rolled out to iPhone users first, then Android users shortly thereafter. Eventually Facebook Live became available to all profiles and page and from both desktop and mobile devices. This one of the major differentiators between Facebook Live and YouTube Live Broadcasts. Since launching livestreaming video, new features for Facebook Live have been added including viewer reactions, comment replay, and filters.

Facebook Live posts have consistently outperformed all other types of posts including images, text-only, and uploaded videos. It is typical of Facebook to allow new features to outperform against its algorithm. Livestreams typically get nine to ten times the reach over other types of posts.

Although Facebook livestreams typically perform better, there are still more things users can do to promote their stream and drive more viewers to watch the broadcasts. One of these is to use the Facebook Live Maps setting. Livestreams with location data re now added to a worldwide map. This map, hosted by Facebook, shows all the live streams happening worldwide.

To add your livestream to this map simply turn on location data for the livestream, your profile, or your Facebook page. The word livestream map is accessible via https://www.facebook.com/livemap. Viewers can see a list of featured videos on the left side column. They can also hover over any of the blue dots on the map to see a livestream. The larger the dot, the more viewers that stream has.

Brands should take advantage of this additional path to content discovery by adding location data to their livestreams. In some instances, for example, a local event, it is possible that a Facebook Page stream may only want to be discovered by nearby viewers. In that scenario location data should stay off. However, most would still use location data for the sake of public relations and get more reach.

Live streams only appear on the Facebook Live Map if it is a public broadcast and location data was shared publicly.
There are two ways to share location data:

Facebook users can always go directly to the map and find other livestreams happening near them or anywhere else in the world. It is an innovative way to discover content. It is also a good way to get the attention of other viewers WO might not otherwise find your content via the newsfeed.