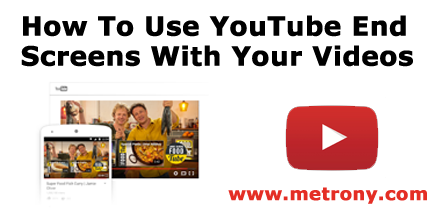 How to Drive More Traffic from YouTube Videos With End Screens

Last weekend I saw a new feature in my metrony YouTube channel admin section. It is called an “end screen.” As the name suggests, an end screen is an overlay that appears at the end of a video – specifically during the last 20 seconds. A YouTube end screens offer suggested content for your viewers to watch next. Rather than letting users click away after watching your video, viewers are prompted to watch another video, visit a playlist, or go to your website. This helps creators grow their viewership by increasing the time spent on the channel. It can also improve clicks to an associated website.

If you are not familiar with YouTube cards and annotations, check out some of my past blog posts. I produced videos on how to improve your YouTube videos, these include:

There are a few ways to get more website traffic or YouTube watch time from within YouTube videos. When I write about or give workshops on ecommerce strategies, I sometimes talk about YouTube as a search engine. After all, it is the second largest search engine next to mama Google.com. Other times, I discuss YouTube as a social media channel, because it is that as well.

Regardless of label, YouTube is a fabulous addition to your content marketing strategy. Shoppers are 80% more likely to buy a product after seeing it in a video. Video titles and descriptions can and should be optimized for SEO. YouTube is a far less competitive search engine than Google.com making it much easier to be found in searches.

Up until last weekend, we had two ways to drive actual clicks to a website from YouTube – one was YouTube cards and the other was annotations. YouTube cards display an “information” icon that viewers can tap to visit the website associated with a channel. Cards can also direct users to other YouTube channels, playlists, polls or donation requests YouTube cards work on both mobile and desktop.

The other way to make a video clickable is to use YouTube annotations. Annotations allow creators to ad pop up quote bubbles or notes prompting users with a call-to-action. Viewers can subscribe to a channel, visit the associated website, jump to a playlist, or crowdfunding project. It is important to understand that annotations are only visible on the desktop version of YouTube.

YouTube annotations are supposed to be replaced by cards, but for now they both still exist and we use them both until we hear otherwise.

Enter the end screen. End screens do a lot of what annotations do – direct users to a website, playlist, video, or to subscribe. However, they have two huge differences – they work on mobile and they can only be placed during the last 20 seconds of a video. If your viewers do not stick around until the end, this is an issue!

The end screen takes the place of annotations but with one caveat. They can only be placed during the last 20 seconds of a video. They are similar to annotations but look a lot prettier even if you are just using one of the template end screens.

Your viewership may have different viewing habits. Check your YouTube analytics to see who your channel serves best and optimize accordingly. My channel still has a lot of desktop viewers, so I use all three options. Remember: End screens and annotations can’t be used on the same video! Check out my first video using end cards, viewers can see the end screen at time = 3:52. I allow YouTube to suggest the next video (of mine) for you to watch.


End screens are far more professional looking than annotations. They are more definitely obvious than cards. The best features is that end screens work on BOTH mobile and desktop! The biggest detractor is that YouTube end screen only appear in the last 20 seconds. So get your watch times up there and be sure to use all options available to your channel: YouTube end screens, cards and annotations.