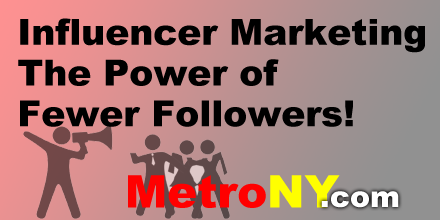 Influencer marketing is not new. Brands leverage celebrities and professional athletes on television commercials, traditional media as well as digital campaigns. One sponsored plug from a recognizable celeb can cause sales to spike. High-profile socialites have spurred on many unintentional promos stepping out sporting her favorite designer.

Few can afford to hire that level of fame. A-list celebrities are able to be fussy about who they work for. Their prices are unaffordable to most brands plus there is the hassle of working through an agent.

Data shows that there is a more engaging and affordable group of influencers. These smaller influencers have an audience of between 10,000 and 250,000 followers on social media. They are referred to as the magic middle, or more commonly the “power middle.”

influence noun in·flu·ence \ˈin-ˌflü-ən(t)s, especially Southern in-ˈflü-\
“the power or capacity of causing an effect in indirect or intangible ways”

Working with the power middle is not simply a trade-off to a more affordable and reachable influencer campaign. Statistics support that they have better engagement rates as well!

We see value in working with the power middle influencers! They have better engagement rates! However, we recognize that we need many micro influencers to have an effective campaign. Of course, many would argue they prefer 1.7% of 1million rather than 8% of 1,000 likes or comments! Other major issues remain. The super influencers are super expensive. Also, they may elect to not work with you!

Micro influencers are simply more affordable and easier to work with. They are eager to provide content and value to their followers. Working with a brand helps them build up their own social media channels and traffic to their blogs if they have one.

Why do these influencers want to get involved with a brand? It helps them provide value to their followers. Influencers benefit by getting more content, advanced or exclusive access to product information, free products. All of this helps them provide fresh content on their social channels.

One thought on “Influencer Marketing – The Power of Fewer Followers”