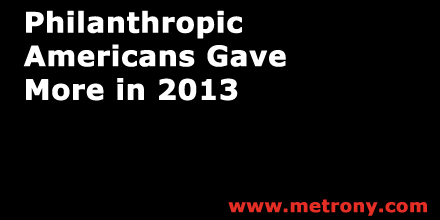 Total charitable contributions for 2013 equaled $335.17 billion. These donations came from U.S. individuals, corporations, foundations and bequests according to the data released in the Giving USA 2014: The Annual Report on Philanthropy for 2013. The report summarizes trends in the nonprofit sector.

“Donors are increasingly more comfortable giving to the causes they care about and at a level in keeping with the impact they would like to make.” L. Gregg Carlson, chair of Giving USA Foundation, which publishes the report.

Giving to K – 12 and higher education showed the strongest sector increase with 8.9% growth. Giving to societal, animal and arts causes also showed strong increases in giving ranging from 6.0% to 8.5%. This was the fourth consecutive year in which giving increased. Philanthropic Americans gave more in five different areas.

In 2013:
Total charitable contributions rose 4.4%
Per capita giving by US adults was $1016
Donations from individuals increased 4.2%
Giving by foundations rose 5.7%
Contributions by bequest increased 8.7% 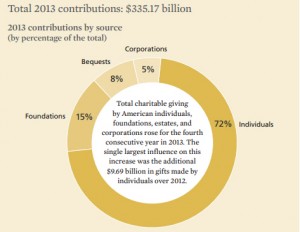 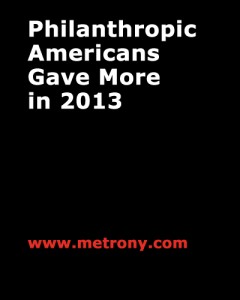