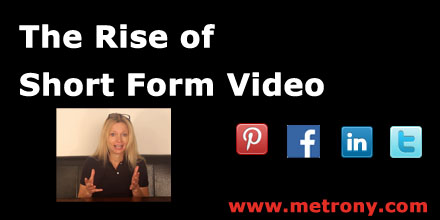 The Rise of Short Form Video

Last week I spoke at Affiliate Summit West 2016 on how to Optimize Images for Social Media Sharing. Part of what I weaved into the talk was the importance of video for marketers. Although the session primarily focused on image sizes, quality and content, I included video because it plays an important role in digital marketing this year.

Shortform videos are defined as video content that is under ten minutes long. Anything else is called longform. I’ve stressed video to my clients for the past two years because video can be used as part of a search engine optimization (SEO) campaign. High definition videos are favored in searches on YouTube. Add a transcript to your video and upload it to your own YouTube channel. This custom content can rank high in YouTube searches, where there is less competition than there is for identical searches term conducted on Google. YouTube is simply less competitive.

Facebook has its sights on the video market too. . As of November 2015 Facebook sees 8 billion average daily video views from 500 million users. In September 2015, 1.5 million small and medium-sized businesses shared videos on Facebook. The average ad revenue per US Facebook increased 50% last year [1]. Note: that Facebook counts three seconds as a “view.”

The good news is the quality level a user expects from a YouTube video has decreased and with it the cost to produce a video.