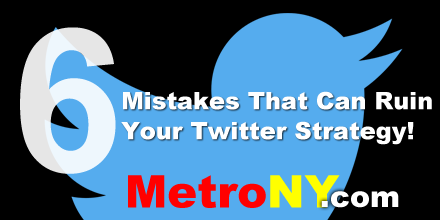 Not uploading your own profile image – a headshot if for a personal brand or a logo for a business Twitter account – is a mistake. Other users are unlikely to follow or retweet a Twitter account that does not have a clear profile image. Why? Missing or fuzzy images are the mark of a spammer or internet troll. Other serious social media users will simply ignore you or worse yet block your Twitter account. Gasp!

A personal brand should feature a nice, clean headshot. If you do not have a high-quality profile photo, then enlist the help of a friend or a professional photographer. Be sure to change it every year or two to keep your account looking fresh unless you don’t age for some freakish reason. Afterall, you do want people to recognize you in person if you ever meet!

Profile images serve as a first impression. They are the most important image on any social media account. A profile image is the one that appears next to every single comment and interaction. It’s truly your first impression – make it count!

Descriptions are an opportunity to introduce yourself and your organization. Like missing profile images, blank decryptions cause users to ignore your tweets. It is challenging to build and maintain a quality audience. Don’t give viewers a reason not to follow back.

Include an image with as many Tweets as possible. The Twitter stream is fast moving and cluttered! Tweets that only contain text get fewer retweets and engagement. They simply get lost in the crowded conversation. If you are actually conversing with someone across Twitter, then the image is not necessary. However, for an account that is posting to share helpful content, include an image whenever possible. Use large, sharp colorful images that stand out in the bust feed. Twitter accepts video uploads too!

Whatever frequency you decide is right for your account, be sure to post on a regular basis. That means, don’t tweet five time per day for a month, then disappear for the next month and come back. Power users will have filtered you out and unfollowed your Twitter, writing you off as a stale account. Stick to a schedule, even if it is only once per day or even once per week.

Selling 100% of the time is a buzz killer! This is a challenging topic for many social media newbies. Find a way to share content, that is not your won, but still relevant to your followers. For example, if your brand sells fitness equipment, then include other healthy lifestyle tips. For example, post recipes or ideas about where to go for a hiking adventure. Make your Twitter account about being a resource that people will want to check in on for useful information.

We’ve all seen some hilarious Twitter war wins. The recent example of Wendy’s and their Twitter rant about their fresh hamburgers was humorous and successful. The rant by the official Wendy’s corporate account won lots of positive press. Unfortunately, a Twitter war can go seriously wrong for a brand. Unless sarcasm is part of your shtick, refrain from engaging in Twitter wars or other social media rants. It’s too risky. Handle your public outreach with quality customer service and genuine respect.