When sharing a post on LinkedIn.com, you can control who can see it by using the drop-down menu below the share box. [Figure 1] Previously, if you posted using the “public” setting on LinkedIn it was visible only to those users who were signed in to their LinkedIn account.

As of the third week of July 2017 posts shared as public on LinkedIn are visible to people who are signed into LinkedIn. In addition, they are now also visible to people who are not signed in as well as to people on other sites as well. Posting something to the public is beneficial as it will get your post in front of more people as they are no longer restricted to only logged-in LinkedIn users. It’s also a privacy concern, as you may not want the information you share going beyond this social channel. 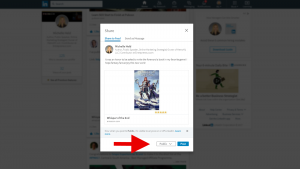 LinkedIn.com is a business oriented social network that boasts over 500 million users come from more than 200 countries. The site was recently acquired by Microsoft. It’s a good site for a career change too as there are over 10 million LinkedIn job postings.

The ability to change the visibility settings for sharing posts to public – making them visible on and off LinkedIn.com – is only available for posts created natively. This means to use this privacy feature you must be using LinkedIn.com, or post using the LinkedIn iOS and Android mobile app. Posts created with other third-party apps that use the public setting, like Buffer, still only post to those signed in to LinkedIn.

Recently I produced a YouTube video about important LinkedIn privacy settings and how to adjust them. If you are updating your profile on www.LinkedIn.com then watch the above video and check on these settings. One of the most important is whether you want other www.LinkedIn.com users to see your updates. This along with your location are important privacy settings if you are looking at posting for LinkedIn jobs.

Have you ever received an email and then noticed a Gmail for the same or similar topic? Scanning Gmail for content and then using the findings to serve ad content is a controversial practice that Google is stopping. Finally! Google scans Gmail users email content and then uses that information to tailor the ad content that is shown to users. These targeted ads appear within Gmail itself as promoted messages.

The decision was made to boost the appeal to business users in order to promote Alphabet’s G Suite products. Google never served Gmail ads in the G Suite (paid) version of Gmail, this practice was only for the free version. However, there was much confusion about the ads and free versus G Suite versions of Gmail. Many G Suite users believed their emails were also scanned for content. Alphabet believes this costs them many corporate clients who are rightfully concerned about online privacy and protecting their corporate secrets.

Alphabet, Google’s parent company, decided to pull the email scanning practice. Advertisements will still show inside of free Gmail accounts. These ads, however, will not use scanned content to target audiences. Free Gmail users won’t be ad free though. Instead, Gmail will still show ads using the other data that Google has on you! Google collects data on users such as location data, browsing behavior when logged into Chrome, Behaviors, and interests on YouTube. Much of this data is used by marketers to target advertisements through AdWords.

Google is an innovator in audience development and targeting. Although social media channels like Facebook and Pinterest also offer audience targeting, Alphabet’s products and ad platform (AdWords) is far more advanced.
G Suite has more than 3 million paying companies. Gmail now has more than 1 billion monthly active users. How much revenue loss this will costs Alphabet is unclear, as Google does not break down its numbers for the public.

G Suite has more than 3 million paying companies. Gmail now has more than 1 billion monthly active users. How much revenue loss this will costs Alphabet is unclear, as Google does not breakdown its numbers for the public.