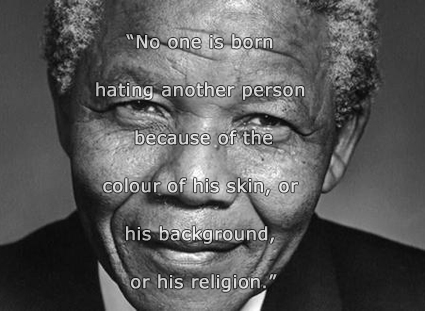 Nelson Mandela went from incarceration to being the President of South Africa. Nelson Rolihlahla Mandela was born on July, 18 1918 and was the first South African president to be elected in a fully representative democratic election.

Mandela was formerly an anti-apartheid activist and was sentenced to life in prison in 1962 after being convicted of sabotage and conspiracy. Mandela served 27 years in prison. Following his release from prison on February 11, 1990 Mandela led his political party, the African National Congress, in the negotiations that led to a multi-racial democracy in 1994.

He has received more than 250 awards over his lifetime including the 1993 Nobel Peace Prize, awarded jointly to Nelson Mandela and Frederik Willem de Klerk, the US Presidential Medal of Freedom and the Soviet Order of Lenin. Mandela was married three times, has fathered six children, has twenty grandchildren.

Below are 10 quotes from Nelson Mandela that embody a lifetime of achievement and wisdom from this great man.

“Everyone can rise above their circumstances and achieve success if they are dedicated to and passionate about what they do.”

“One of the most difficult things is not to change society – but to change yourself.”

“Education is the most powerful weapon which you can use to change the world.”

“A good head and good heart are always a formidable combination. But when you add to that a literate tongue or pen, then you have something very special.”

“I learned that courage was not the absence of fear, but the triumph over it. The brave man is not he who does not feel afraid, but he who conquers that fear.”

“Resentment is like drinking poison and then hoping it will kill your enemies.”

“There is nothing like returning to a place that remains unchanged to find the ways in which you yourself have altered.”

“The greatest glory in living lies not in never falling, but in rising every time we fall.”

No one is born hating another person because of the colour of his skin, or his background, or his religion. People must learn to hate, and if they can learn to hate, they can be taught to love, for love comes more naturally to the human heart than its opposite.