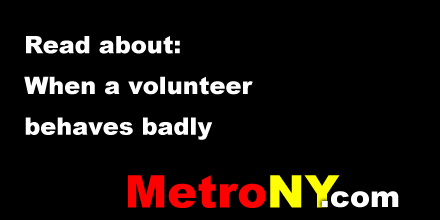 I manage volunteers and organize large fundraising events. Recently I had a volunteer, Al, get in to multiple conflicts at a one (very long) day event. The behavior came as a surprise since this particular volunteer was a team leaders and actually help write the policies manual for public events! To make the situation more complex, I did not witness any of the behaviors but received over ten complaints from individuals who either were the target of his ire or witnesses to it. The stories were so similar I believe all of them. The morning began with unprovoked arguments with staff. AL felt things were not as they should have been. Arguments escalated to summing security to enforce rules. All that Al felt was wrong could have been soothed and calmly explained if he had just called me before escalating matters into a confrontation. Al repeated the argumentative behavior until I caught up with him two hours later at a location he was not scheduled to be at.

I am fortunate that my volunteers are so dedicated. They called me an offered to work longer if I would just find a reasons to send Angry Al home, which I did.

Within 48 hours of the event, I called Angry Al to hear his side of the story. Al was not owning up to anything. He acknowledged the conflict but does not see that his behavior did not fix any of the “problems” he identified. He seems oblivious to the fact the other volunteers don’t want him at the next event. For the next month, the volunteers complained to me about Al each time I ran into them.

Al is a critical part of the team but obviously not very good as a front-facing people person. I really need his expertise and there is no one else to fill Al’s role.
My efforts to get Angry Al to own his bad behavior failed but I plan on working on it in small steps. All of these volunteers have to work together again in a few months and this problem needs to be rectified. Al’s behavior needs to change and the other volunteers need to hear that their concerns are followed up on.
What’s a volunteer coordinator to do in this situation?

I will continue to talk to Al over the next few months to get him to the point where he can see how his behavior hurt our event and the effect it has on the other volunteers. It is a delicate situation.